I Am They Coming to RiseFest!

RiseFest is excited to announce the third artist on the 2019 festival lineup, pop-acoustic worship group, I Am They. This will be the group’s first appearance at RiseFest scheduled for June 21-22, 2019. They join a lineup that already features Skillet and Zach Williams. 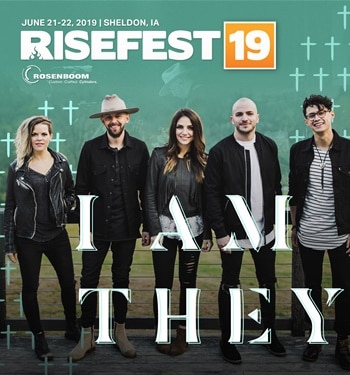 “Three weeks, three artist announcements. This week is another exciting one with I Am They!” said President and Founder of RISE Ministries, Rob Roozeboom. “A worship band who has never been to the festival and we couldn’t be more excited to have them join us. They have a heart for worship and it definitely radiates when they play. RiseFest 2019 is shaping up to be exciting with Skillet, Zach Williams, and now I Am They!”

I AM THEY made its national debut in January 2015 with their self-titled album on Essential Records. The band’s five-piece, pop-acoustic-worship sound is anchored by three-part vocal harmonies. The group, made up of Abbie Parker (vocals/harmonium), Jon McConnell (vocals/guitar/keys), Matt Hein (vocals/guitar/mandolin), Justin Shinn (keys/banjo) and Sara Palmer (drums) represent I AM THEY – inspired by John 17. “In that chapter,” shares Sara Palmer, “Jesus is praying for his disciples and refers to them as ‘they.’ He’s praying and saying things like, ‘Sanctify them. Make them holy. They are not of the world because I am not of the world.’ He’s really interceding for his disciples. We are disciples of Christ and being disciples is just as important today as it was back then. We’re still here for the same purpose on the same mission with the same calling, bringing people to the Lord and spreading the news of the Gospel to people. We really wanted to incorporate that into our mission as a band, saying that anybody who is a believer in Christ is a ‘They.’ They are a disciple as well so we can stand together in that and really bring people into the ‘I AM THEY’ family because we are all family in Christ.”

Tickets for RiseFest 2019 are on sale now with a new and exciting twist. During the month of November the RiseFest PriceSlide invites you to do your part in lowering ticket prices by as much as 46%, potentially all the way to $21. The more people who reserve their tickets by November 30, the lower the price will go. Kids 10 and under will remain free. Tickets can be purchased here. This special is for general admission tickets only. Kid, Prime Tickets, and camping will be available to purchase at the beginning of December