The brand new school year is here. Once again summer has flown by and we are all getting into our new routines. Maybe there’s some excitement in your house this week. Everybody is ready to be with their friends every single day again. New clothes are purchased. New backpacks are loaded with supplies. The anticipation for new experiences is palpable!

As much excitement as new years bring, there’s also a guarantee that at some point during the school year we won’t be excited about walking those halls. A test won’t go so well. An assignment won’t get done on time. The game we all thought we were going to win turned into a loss. Someone said something hurtful to you or worse, behind your back. All of these things can make us feel small. They can make us feel like we don’t have value.

I think one of the major reasons why so many people struggle with depression and anxiety nowadays is we have forgotten that we matter. We forget we are valuable. Oftentimes we make each other feel this way. It doesn’t take long to tear someone down.

Luke 6:31 says, “Do to others as you would have them do to you.” Pretty simple right? We all know this “golden rule” deep down. What if during this school year we ACTUALLY lived it. Not only that but what if we went out of our way to make those around us feel like they have value?

Give someone a compliment. Listen to your teachers and coaches. Tell a family member you love them. There’s a million different things we could do. Not only will you make a difference in someone’s life, you’ll feel you like you matter in return! Let’s make this school year the year we add value to those around us. Every. Day.

I don't know about you but going back to school can bring so many emotions. 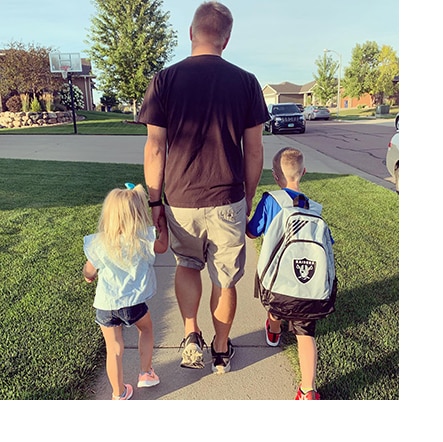 Tears  of sending off your little one for the first time to kindergarten. I just had a friend experience that. I think his wife finally comforted him and told him it'd be alright because their son would be home after school.

Celebration  that your kids are actually back in school! Because the fighting and arguing at home was driving you nuts!

Maybe you feel excitement  and sadness  that this is the last year you'll send them to high school.

I'm much closer to the senior in high school than I am the first-time kindergartener. And the closer I get to having a senior the more I wrestle with excitement and sadness. I'm excited that he's growing up, but sad at the same time knowing these next couple years are going to fly by.

It's universally true, kids grow up! We only have so much time with them, then it's time for them to leave the nest. Sometimes whether we're ready for it or not. As your kids grow up remember this powerful proverb, "Train up a child in the way he should go; even when he is old he will not depart from it." Proverbs 22:6 (ESV)

Because before you know it, they'll be having their last first day of high school.

A Little Advice for You...

So much of my life has been the same for the past 8 years. I graduated from Dordt College in 2012, and have worked at RISE ever since. A couple years ago, I wrote a journal entry describing how I felt as though my life felt like a year long version of Groundhog Day - that movie where Bill Murray goes to sleep and wakes up to live the same day over and over again.

My life revolved around designing and preparing for RiseFest. Doing RiseFest. Heading out on our two mission trips, and finishing my summer by taking a trip back to Montana to relax and visit friends. When I got back, I began the whole process all over again. I was so used to my routine. Nothing big ever changed, and I knew what I was doing.

Last year in August I got married. It was a big change for me - a new chapter of life. I had no idea how to be a wife. Guess what? I'm figuring it out! I ask for advice, go with the flow, and our first year of marriage has been great!

Well, there’s another big change coming now. In 4 months to be exact. My husband, Colton, and I are becoming parents in December! I’m going to be honest, I have no idea what I’m doing! My mom came to visit me last weekend and help paint the baby room and shop for decorations. I’ve gotten a few cute outfits for the baby, but when I look at preparing for a baby to do lists, I get overwhelmed at how much there is yet to do.

I don’t know which kind of bottles to get, or the best brand of diapers to buy. You guys, I still haven’t got daycare lined up - #worstnewmomever!

I have no idea what I’m doing! What I do have is lots of help. Colton loves being informed and he gives really good hugs when I’m feeling overwhelmed. I’ve got an incredible mom and mother-in-law. I’ve got lots of friends around me with kids, or having more kids. They all are there to encourage and pray for me, and offer advice. I may have no idea what I’m doing, but I’ll figure it out! I’m scared, but so excited at the same time.

Students, maybe you are going through a big change. Walking into the first day of middle school, high school or college can be really scary! Maybe you're a parent, sending your kids to school for the first time. Maybe you’re starting a new job, or a new relationship. These are all big changes that many of us are walking into saying, “I have no idea what I’m doing!”

Proverbs 3:5-6 says, "Trust the Lord with all your heart, and lean not on your own understanding; in all your ways submit to him, and he will make your paths straight." When we submit our lives to the Lord he will guide us. Spend time in prayer asking for wisdom as you navigate these changes. We can dive headfirst into these new experiences with courageous hearts when the Lord is leading us.

The Bible never once says, "Figure it out.”
But over and over it says, "Trust God."
He's already got it all figured out.

Since we’re talking about going back to school, let’s learn something, shall we?

The word influence, as a noun, is defined as “the capacity to have an effect on the character, development, or behavior of someone or something, or the effect itself.”

Parents. We are the most influential! Our kids watch how we react to situations. Do we rage out or handle disappointment and frustration calmly? Do we gossip about our coworkers? Are we kind to people we interact with?

Proverbs 22:6 says, “Start children off on the way they should go, and even when they are old they will not turn from it.” Let’s strive to be a positive influence in our lives!

“You will never influence the world by being just like it.”

I'm a dad of a teenage and tween girl, and the teenager is a redhead! Heaven help us!! The other day my fiery, redheaded teenage daughter was enlightened when an older gentleman tapped her on the shoulder and said, "Young lady do you know what they say about redheads?" "No," she said. "God put red hair on people as warning labels."

I would've liked that advice 14 years ago! Warning label (about my redheaded teenage daughter) - approach slowly, tread lightly, don't ask too many questions, give her some space and just listen. Which I'm terrible at. I want to give directions. I want to fix problems. I want all things in your life to run smoothly.

Not too much to ask for, right? But let's be honest, heading back to school definitely changes the game for teenagers. During the summer they were almost nice, and they laughed every once-in-a-while.

But now the pressure is back for them. Friends - which group do I fit in? Sports - did I make the team, am I a starter, will I ever play? Expectations from parents, coaches, bosses, teachers and the list goes on and on.

I get that going back to school can be stressful. There is a lot to deal with. But remember who you are, and whose you are! God made you for a purpose. If you don't believe me check out Psalm 139:13-16.

You might be struggling to find it right now but hold on. He'll show you. And if you're a redhead, remember, He made you extra special because He put warning labels on you!

“You had a purpose before anyone had an opinion.”
- Timothy Pina